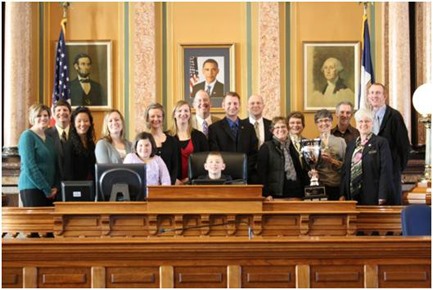 Getting your entire community on board with a wellness initiative can be difficult at times; one county in particular found a way to overcome that obstacle. Washington County’s wellness coalition has been in existence for a few years; it began after a Community Health Needs Assessment in an effort to increase the health of their youth.

“While all of the districts/schools who participate in Live Healthy Iowa Kids work very hard to ensure their wellness efforts are successful, there are a handful of districts who just nail it!” said Lisa Weber, Live Healthy Iowa Coordinator. “Two of those districts just happen to be in Washington County. It just so happens that their county also has a very active wellness coalition and that is no coincidence!”

The coalition worked very hard to make sure their efforts were not only successful in the school-setting, but also at home! One example would include their involvement of the local media, grocery stores and schools; they connected with a local grocery store in efforts of highlighting a fruit/vegetable each week, then connected with a local radio station to announce a fun fact about the fruit/vegetable on special that week and talked with the schools to also share the fact and include it on the lunch menu for the week! This is only one example or what their coalition worked on and a great example of what happens when you put a group full of people to work on a common cause!